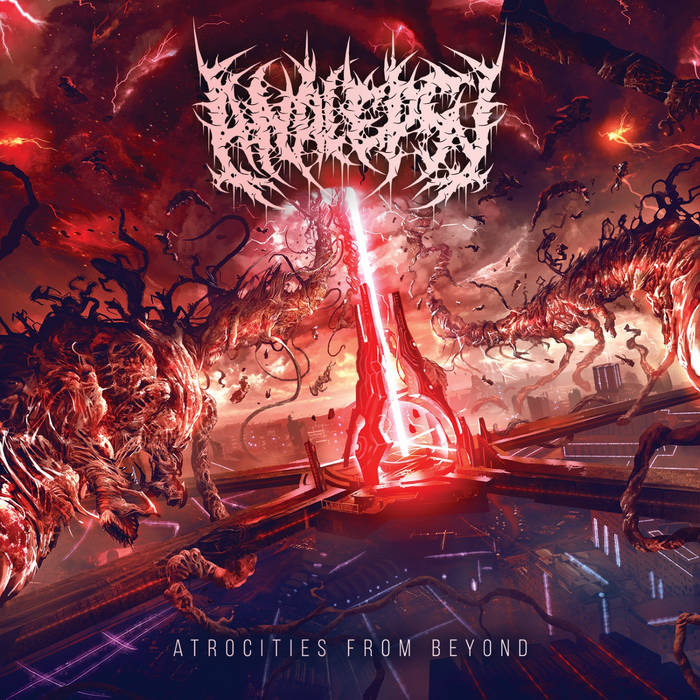 ssaamil OMG Analepsy! My favorite band of all time. Plus my favorite album of all time. The slams are f*cking insane and the vocals are so good! Keep up the great work, and stay strong!! Your supporters are here!! Much love!!

Death & Technology I apologize to every who's ever seen my face when I've blasted this song while hammering the pedals of any bicycle, because you've most certainly seen the most disgusted, brutal grimace the human face can assume. This is slam with a bounce so infectious and heavy that you feel compelled to headbutt random pedestrians. I love everything about this album. Favorite track: Witnesses of Extinction.

zirtonic These guys are punching far below their weight class on this record, and I say that as a huge fan of brutal death metal. The amount of technical prowess and musicianship they show here begs for far more complex arrangements. The album is admittedly very front loaded, but the first 5 songs are some of the best brutal death in recent memory. The second half is more slam focused, and while it isn't bad by any means, it pales in comparison to the album's first 15 minutes. Fantastic debut. Favorite track: Witnesses of Extinction.
more...

A co-release between Vomit Your Shirt (Portugal) and Rising Nemesis Records (Germany).

Recorded, Mixed and Mastered by Miguel Tereso of Demigod Recordings.
All intros and FX by Analepsy and Miguel Tereso.
Drums recorded by Tiago Mesquita at Nox Messor Studios.

Track Name: Apocalyptic Premonition
Materialized Visions of an Ending Era
A Glimpse of Death
Foreshadowed in My Dreams
There Is No Error
The Gateway Is Open
Despair Will Follow
In My Eyes the Beasts Fall From the Sky
And They Will Swallow
Entire Race Perishing
Turning Into Nothing
Their Rage and Famine
Over the Masses
The Absurd of Destruction
Following the Design
Creatures With No Purpose but to Consume

Starvation, Affliction
Ravage, Devour
Starvation, Affliction
Ravage, Devour
Track Name: Rifts to Abhorrence
The Slit in the Middle of Our Cosmos
Spat Aberrations as Predicted
Crushing Everything in his Path
Eradicating All Existence
With No Resistance In Their Way
The Decimation Has Begun
The Massacre Has Only Just Started
And All Life Around Would Have Been Erased
As Long as They Starve, the Parasite Will Never Stop
Consuming Essence
Like An Act of Purification the Root of the Malicious
Continues to Spread Over Our Home
Without Getting Tired
The Vicious Being Will Tear Your World Apart Now
There's Nowhere to Hide
We Anticipated This Event Years Ago
Now It's Time to Face Reality
Track Name: The Vermin Devourer
A Reign of Misery
A Vital Source to Consume
A Ruler of an Angry Nest
Carcasses of Fallen Relatives
Too Many Mouths to Feed
Deteriorating in Their Own Suffering
A Curse Till the End of Times
Condemned for Eternity

But Every Cage Has Its Fails That No One Could Predict
The Asylum Began to Rupture
And the Breach Flooded With Corpses
Vermin Devourer, The One Devourer
With No Relent, They Marched to Freedom
To See the Scourge End
Track Name: Witnesses of Extinction
For Those Who Survived
Their Confidence Is in Vain
the Belief to Escape Is Just a Shadow of Lost Faith
Between Shattered Worlds
Hope Fading Away
One Perfect Civilization
Now, Resting in Dust

Dried Universe
Nothing to Eat
Eating Your Own Kind
Spare No One
Impulse to Devour
Eating Each Other
Incessant Hunger, Crushing Through the Line of All Creatures

Near the End, All Seems Clear
Animal Instinct
Survival for the Fittest
Crush My Fear Obliterate and Smash
All With Hate
Instigate Fear

Unable to Stop It (x2)
Track Name: Engorged Absorption
Deeds of Damnation
Between Modified Reality
The Forsaken Sends the Sickest Damned
Unto the Abyss of Infinity

Now the Entire Existence Is Reclaimed by the Ancient Unholy Entities

Condemned... By a False Ideology
Engulfed... By the Darkest of Realities

Devastated, Impure Life-form
Perished Through the Desecration
Your God Is Vanished
Prevail the Abominations
They Have Slept for Centuries

Condemned... By a False Ideology

Behold the Suffering...
Invoke the Awaken...
Track Name: Eons In Vacuum
Wandering in the Darkness
Traveling Through Empty Space
Notion Is as Abstract Visions in My Brain

Who Am I?
Why Am I Here?
The Pain, I Feel, This Can’t Be Real
My Flesh, My Soul, Is Real After All

Why I Am Feeling Like This?
What Can I Do to Exist?

Trapped Here in This Moment
Memories, I Have None
Agonizing Here Alone
In My Own Torment

The Pain, I Feel, This Can’t Be Real
My Flesh, My Soul, Is Real After All
A Flash of What I Can Become

What Have I Become?
Track Name: Depths of Agony
Instrumental Track.
Track Name: Atrocity Deeds
Feel My Hands Controlling Your Life
My Dearest Puppet
You May Calm Me God

My Will, My Desires
Echoes in Your Suffering, Uncontrolled

by My Will, by My Desires, by My Hands You May Agonize
Pleasing Deaths, March for War
Faded Hope, Corrupted Minds, Bleeding for Me

you’re Mine, My Own, Blinded Servants, Arrogant Believers in Fake Images
From All Creations I Have Made, You Are the Worst
The Most Disgusting Feeling for You Is What Motivates My Ways
Thirst to See You Bleed Fills My Mind and Warms My Hearth
The Mistakes I Commited in the Past Just Turned Into Profit

Bandcamp Daily  your guide to the world of Bandcamp